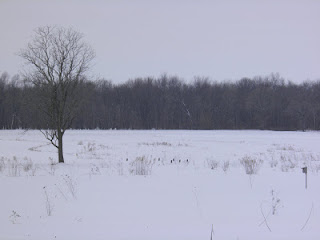 Making my way to the Montezuma Audubon Center (MAC) using a counter-clockwise detour brought me to the Savannah Spring Lake Road. There I observed a my first Red-winged Blackbird of the year. 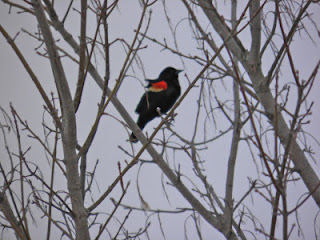 Arrived at the MAC at 10 AM. Workshop leader, Naturalist Dave Spier, was busy preparing his presentation. Assembled in the conference room were 11 participants, 4 women and 7 men (including myself).

Since Dave was having difficulty in aligning his new laptop with the screen projector, he made the decision to take the group outside.

Passing the bird feeders on the way to the wood, Dave mentioned that there were 100+ Red-winged Blackbirds on the ground around the feeders when he arrived this morning.

Once in the woods using his fingers in the snow Dave illustrated the subtle difference between rabbit and squirrel tracks. Rabbits tend to form a Y pattern while squirrel indentations resemble a butterfly. Dave mentioned that rabbits will seek safety under logs and hollow areas made by bushes pushed over by snow.

Doing some trail maintenance Dave tore a twig from a Northern spice bush. Passing the specimen around for the group to smell Dave made the point that rabbits having upper and lower teeth make a clean cut when they forge on branches. Deer however having only lower teeth and a flat upper plate tend to rip branches. 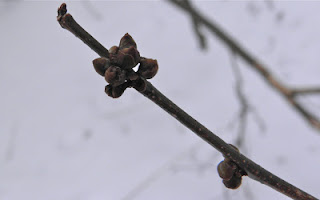 Noting a fallen limb that had been chewed by an animal Dave demonstrated the use of a tripod. 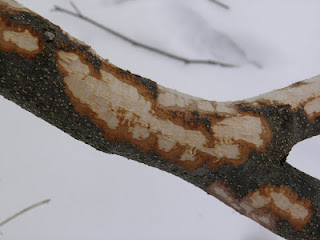 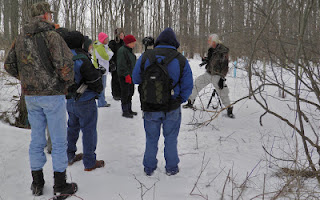 With the overcast sky producing poor lighting Dave decided to take the group back inside. On the way in Dave pointed out this nest which may have been used by a warbler. 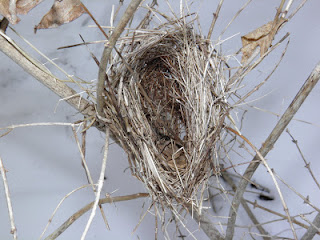 n our absence, MAC Director Frank Moses had corrected the computer glitch and Dave's presentation was ready. Dave used his projected photos to make suggestions for capturing nature. Many of the participants had questions for Dave which he answered often using his equipment as props.

Leaving the workshop I purchased a sub sandwich at the Wolcott Big M and brought it to Bradley's home for lunch. On the way out of town stopped at the Wolcott Falls.

Posted by photodoug at 7:57 PM